ONLINE-RACER.COM for all Motorsports enthusiasts.

Back to the Tracks 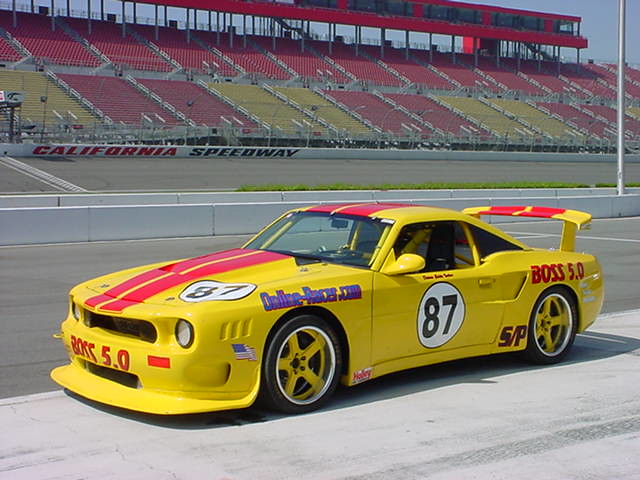 The BOSS 5.0 the new name for the GB400R took a sweeping 1st place in the "Historic Sports Car Festival" at

California Speedway. Running in Group 12 the last race of the day, Edward Inclan held the lead in the 2/EX class and second overall in a field of 19 cars.

The road to this weekend was not easy, Murphy's Law was with us from the moment we got accepted to the event.

HSR West sends out special invitations to participants who have historically significant race cars only. Ed Swart, Director of HSR West made a special exception only a week before the event and allowed our cars to run.

Car #87 still did not have an engine ready for the race. Our crew was in Nashville TN, setting up the new facility for the production of the BOSS 5.0 when the news came in. The crew cut their trip short and came back from Nashville on Saturday as we needed to be on the track the following Friday.

Nick Burr our crew chief, started the assembly of the engine, he found that the main bearings were the wrong size! Now we had to wait until Monday for new bearings and start the assembly. Don't panic, we still have 4 days to get it all done. Monday morning- once all the parts were ready, the clock started counting down to finish the motor. The first piston goes in and...oops!, the top of the piston is out of the deck of the block by 0.030 of an inch, yikes!  The solution at this point was to install a much thicker head gasket. The only place that had it was in Nebraska, so we ordered it for next day delivery.

Tuesday morning - and no FedEx, we call our supplier only to find out they are on back order for 3 weeks! After several calls to machine shops we find out that our friends at Pacific Performance can fly cut the top of the piston by the next morning. Now we had to wait till Wednesday to start the building process.

Nick is ready to build Wednesday by 11:30 am and after Doug Gladney (team fabricator) finished chasing parts, they both focused on getting the motor done. This is what racers call "burning the midnight oil". Nick and Doug left the shop at 3:30 am on Thursday with only installation remaining. But not with out a glitch, the pushrods were the wrong size, yet another delay.

Finally, after another panic moment over the pushrods, Nick  set a new record for building a race motor from scratch to  the point of starting it up. Only 35 hours. WOW!

With only minor valve adjustments needed on the car we decided to load the cars up on the trailer and rush them to the track which fortunately is only 20       minutes away from our shop. (

While Nick made all the final adjustments, Doug and the rest of the crew set up our weekend garage.

Our weekend was about to begin, thanks to the hard work of Nick, Doug and the rest of the crew.

We are now ready to have some fun! The garage looks great and

Michael Noval who drives car #88 brought his March Wildcat Indy car that just added to the good looks of our garage. This car is powered by a 3.8L 15:1 compression Buick engine that makes about 500hp!

Saturday- both BOSS 5.0's (formerly GB400R's), would go out for practice. Car #88 was ready for practice and #87 well, we had to baby it during this practice session.

Unfortunately car #88 came in early from practice with a broken rod. Not quite sure how that happened but that's racing for you. The next session for the Boss 5.0 would be a qualifying race that would determine the grid for Sunday's race. Due to the fact we didn't qualify on Friday we would have to start Saturday's race from the back of the pack.

We were confident we could finish the race in the top 10, which was important because Sunday's race was so short that a good grid position would be the key to winning the race.

Michael on the other hand, had two jobs to do - he had to qualify well for Sunday's HSR - West race, and he also had an A.I.S.  (American Indy Car Series) race. This group which is based out of Hawaii joined HSR as part of their on-going racing schedule.

On Saturday, Michael started the A.I.S. race in the back of the pack and managed to finish an impressive 3rd in round 2. Good going Michael! In Sunday's A.I.S. round 3 race, he finished 2nd. Check it out!

Group 12 was next, a diverse one as far as cars were concerned. A number of Porsches 911's and 914-6 which traditionally are very fast along with a couple of Lister Jaguars and Lotus Elise.

As soon as the green flag dropped, it was a charge to the front of the pack, one car at a time. The Boss 5.0 has so much power and it is so stable at hi-speeds, that passing on the top of the 14 degree banked turn was an easy task. Due to a lack of time prior to the event, some suspension changes were left over from the Vegas race. Back in Vegas we had set the car up to have a little push. Well, we forgot about that and... wow! The car had lot's of push now, making it a little difficult to exit fast in slow corners.

When we got back to the garage, we noticed that the front tires were so worn out that you could actually see the air in them. We needed new tires, and since car #88 was not going to start the race we decided to borrow the wheels and tires from it. These tires were in much better shape than ours, and could get us an extra second given the fact they were racing slicks.

RACE DAY! The moment of truth, can we compete against these highly modified GT2 Porsches? This was a sprint race that requires fast moves at the start of the race. If you don't move quickly the front running cars will get away from you making it quite difficult to catch them and set up a good clean pass.

The race course was set-up with a narrow chicane on the front straight before turn 1. There is no way that two cars can go through         there side by side, therefore, the race organizers decided that there would be no passing on the first lap until after the chicane and to insure the safety of the competitors they will start us single file, simple and safe rule....right?

As I watch the pace car dive into the pit road we all bunch up going onto the front straight and the green flag drops! The white Porsche 914-6 driven by Geary Smith pulls away from the pack. I had my eyes set on that car with my foot planted

on the throttle when I noticed that the Porsche 911 #5 driven by Hank Godfredson slowed way down...oh no! I either hit the brakes hard or make a safe pass....so I passed! It was quick and very clean. After the second lap I was closing the gap between the BOSS 5.0 and the 914 who led the race. When to my surprise I spotted a black flag with my number next to it. At first I thought it may have been a mistake but after another lap and a very emphatic starter pointing the flag at me I figured it was no mistake.

I was so disappointed my only thought was that I was about to loose the opportunity to win the race. I stopped at the black flag station and as I come to a complete stop I see the official wave me on! What? Alright! It was only a stop and go and my brain is yelling go,go,go!

I end up behind the #5 Porsche so I now sat in 3rd spot. The Mexican came out in me and I remembered the Alamo. A drag race around the banked turn and out brake the Porsche put the Boss 5.0 back in the second spot. Unfortunately, the race was over before we could really catch up to Smith, but our lap times proved that we had a good chance at the overall win.

Online-Racer.com   We race and use what we sell.

VISIT OUR EBAY STORE AT: 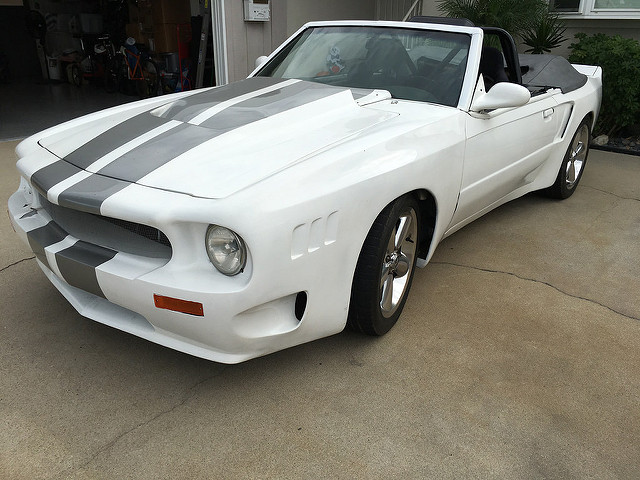 Our 1989 Mustang has been out test mule for quite some time,   purchased form it original owner in 1993.  Its  gone from stock bot -on mild performance parts to wild body changes.  Has seen some fun racing events all this in an effort to test parts and mods which we have sold thorough the years.

Its time now to re-vamp the looks and performance of our "little mule.   The last major change was the complete body of the now defunct GB Mustang of the early '00's.  The GB Mustang was a company who developed a retro look roadster prior to the '05 Ford Mustang release.  I was lucky enough to collaborate with the company in developing a very successful racing program to market their street version cars.

Our little Mule was one of the beneficiaries of the remaining parts of the GB Mustang company and we had the pleasure of fitting the panels to it and enjoy the looks for quite some time.

Its now time for change,   the little mule is such a great platform that includes lots of go fast suspension upgrades .  This time the little Mule will serve as a street/track car.

We start by removing all the fiberglass panels.  The GB Mustang used a 1 pc front end and 1 pc rear.  The front end simply unbolts and can be re-used.  The rear end is a completely different story.   The original roadsters witch also used the fox platform, had to have entire rear body removed in order to install the 1 pc rear end making it impossible to bring back to original.   In our case, as we wanted to have the ability to go back to stock (as we are doing today),  we cut the fiberglass panels and fitted them to the body.   Labor intense but worth it.

However, we did such a good job and fitting the panels that its now a real hassle to remove LOL.   The good news is that after a couple of days and several minor finger injuries its off.

The original plan called for a simple body and paint job but after looking at the engine bay it was evident that years of use had taken a toll. The engine bay needed to be re painted and good excuse to get the engine re freshened even though this engine is still running strong with less than 50k miles.

The original GB Mustang rear end was 1” wider than the stock Mustang. We want really like the looks of the wide Mustang stance and the ability to mount beefy tires. We called Mier Racing and ordered a pair of their 1” rear fener flares. They are rather easy to install with some cutting involved but once they are on they really make a difference.

Our friends at Rafaels Body Shop took care of re installing, aligning amd custom fitting of parts including the lower door rocker panel that patched the contour of the old GB Mustang door cover (it a little wider and has a minor curve).

The standard fiberglass cowl hood on the 90’s and the slick LX bumper cover and the Saleen front spoiler was the choice even though this Mustang started life as a GT. Once we spray the car in a similar Eleonore gray, this project madess will look wicked.